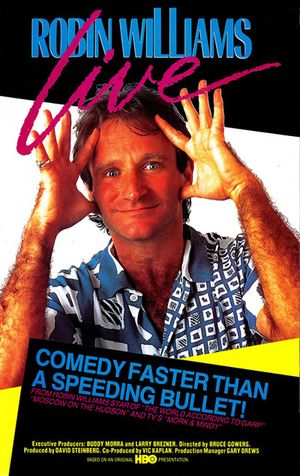 Celebrity as a force in our world is no stronger or stranger than when a celebrity dies. Everyone has a reaction ranging from “who?” to “that person changed my life”, critical appraisals to snarky cheap shots on Twitter and they all add up to a surprisingly unfiltered composite of how that person made a mark on our world. It’s a little like taking a portrait, tearing it up into a thousand, tiny pieces and gluing it back together again. Somewhere, in the jagged seams of the mismatched and mangled pieces of that photograph is a legacy.

Robin Williams taught me how to be funny. He wasn’t the only one, but he was an early one and ineffable… though I will try to do him justice. I don’t say that I’m funny boastfully but I do so tribally – I claim it like a family tartan. Funny has a higher currency to me than most things in my life. Funny is magical, difficult and terrifying, requiring a lot of work and study and repeated doses of failure. A good laugh is the best feeling in the world. Getting a laugh is a close second. I’m not a comedian by trade but I have the deepest respect for it in all of its professional guises: writing, stand-up, sketch, improv, acting, clowning, musical parody… aw, hell, even mime, why not? (Robin understood the perils of mime.) Funny is a gateway to a lot of living, notably sex and a social life, so I am ever thankful that I can manage, on occasion, to share a laugh with people.

Robin Williams arrived to most of us as an alien. I was barely past diapers when Mork and Mindy hit the airwaves but I relished every viewing because it always felt like a surprise. That was Robin’s greatest gift early on: his unpredictability. People knew that every time he was on TV something was going to happen –  a detonation of ridiculousness and irreverence and there was nothing else like him in the world at the time. There may never be again. It’s hilarious to me that Hollywood producers somehow shoe-horned him into Happy Days. Given the context of the show, it makes less than zero sense but audiences didn’t care because Richie was dopey and the Fonze was cool but this guy, this guy, was a live action Looney Tune.

Mork and Mindy was mostly terrible show in retrospect but it was there to provide a playground for the ebullient talents of its star. I wonder if Pam Dawber was enchanted like the viewing public or frustrated by having the most thankless role on television. Either way, she rode shotgun with Williams for years where the plots were as surreal as having Jonathan Winters, born from a giant egg, as their son or Mork channeling Mindy’s dead relatives while possessed in a haunted house. America was eating up pure nonsense in the 80’s, I guess. How else do you explain the rise of Conservatism? The Regulars were too busy Nanoo-nanoo-ing to see what was happening!! Mork may have been the alien but Reagan was the invader.

For me the real magic of Robin Williams came courtesy of home video. In the mid-80’s there was a video store up the street from my house which was so fancypants it had VHS one side of the store and Beta on the other. The Beta ghetto had limited selection and much of my early movie education was determined by scarcity. Krull and The Last Dragon aside, I was always drawn to stand-up concert movies. They had a mystique about them, these lone hunters prowling an empty stage, delivering extended and unfiltered insights about an R-rated adulthood only ever hinted at by their TV appearances.  The whitest, most sheltered preteen suburbanite suddenly had a view into a world of sex, drugs, race, class, parenthood, politics and neuroses thanks to such unlikely tour guides as Bill Cosby, Richard Pryor, Eddie Murphy, Billy Crystal, Stephen Wright, Richard Lewis, George Carlin and, of course, Robin. I would watch in fascination at these maestros conducted their audiences. So much of the material was completely over my head but I knew it had to be funny because the audience was in hysterics. And with Robin Williams, the words almost didn’t matter.

Robin’s command of a stage is unparalleled. His understanding of his own body language is precise and masterful. He knew how to play from the front row to the back of the room and from his face down to his fingertips he sold every voice, character and moment with absolute zeal and commitment. The performance that got endless replays in my VCR was A Night at the Met, from 1986. It’s on YouTube in a variety of forms: watch any given piece and just admire the dance. He moves like a ballerina, a feline, an explosion, a puppet, all within seconds of each other, his brain carrying the dizzying pace of his improvisations past the actual jokes and into every twitching muscle fiber. He’s like Batman or Buddy Rich – creating and adapting to every new moment with an endless array of tools and the expertise to make those weapons devastating.  He’ll catch you off guard, delivering a feint where you expect a hit and lay down beats so hard and heavy that, even as they overwhelm you, you have to marvel in the experience. A comic book hero and a Jazzman: I think he’d be okay with those comparisons.

This was all getting hardwired into my child’s sponge brain. My friends and I were watching these routines and ones that would follow from The Survivors or Good Morning Vietnam or Comic Relief and internalizing them. We were finding the rhythms and the inflections and slowly moving from repeating them to one another to make ourselves laugh to slipping them, seamlessly we hoped, into our own everyday conversations out in the wild. When they worked we mentally high-fived each other and bowed to Sensei Robin. When we got it wrong, off by just a word or pitched incorrectly by mere cents, we went back to the basement dojo and rewind the lesson.

I was given the gift of a stage in 1986 through my city’s remarkable children’s theatre program and I prowled that proscenium for 6 straight years. I stole liberally from the names listed above and more: Python, SCTV, SNL, Bob Newhart, Nichols & May, Albert Brooks, Mel Brooks, and Woody Allen. (Yes, I knew of all these people when I was 12. One of the local FM rock stations used to play a show on Sunday nights called The Comedy Bowl where they ran comedy albums into the hours well past my bedtime and it was far more essential listening to me than most of the music they programmed.) Every laugh I earned over the years on that stage was a precocious calibration of the dialogue and choreography I was given and the distillation, as best as I could muster/fake, from the work of geniuses. I guarantee that if any video survives from then that I can be seen, on several occasions, striking a Robin Williams pose on the stage: chest out, arms back, legs primed to dance, leap or strut into the next moment, eyes shimmering, not so surreptitiously scanning the crowd for both approval and obeisance.

I see that every time I watch Robin – there is equal measure of “love me” and “gotcha” in his expression. He loves to perform, he knows he’s good at it but he doesn’t always trust it. The laughter is both a triumph and a reassurance. It’s something that never changed in him over the years that I found extraordinary: He could never entirely mask the vulnerability. But then, I think that’s also why he is so beloved because, while he always wore the armor of his persona, those moments in between the jokes were where his humanity blossomed.

Maybe a tribute like this would be more meaningful coming from someone famous or successful but I want to express how there’s a relationship between me and this famous person that is not abstract. I’ll never get to tell him so and I’ll never, as I often daydreamed, get to be his peer or playmate but he has a real and lasting impact on my life. He’s a teacher as important to me as any I had in school. He’s an inspiration. I suspect, based on all the tributes I’ve read in the last couple of days and knowing some anecdotes from local comedians and film folk, that he might have had even more to teach offstage than on.

I never met him though we shared some space once when he came into the bookstore I worked at. I was impressed by his lack of pretension. He wore a backpack and a backwards Kangol hat and joked quietly with the staff. He neither turned up the volume nor avoided interaction; he was just being a real, funny person. I’d seen plenty of other lesser celebrities come through that store without even an ounce of his grace and charm. But that’s it. He walked into my world, stood a few feet away, made me smile and left. I’ll take it.

Over the coming days and weeks, better eulogies and analyses will pour in. More qualified people will speak to issues of mental health and addiction. There will be too much talk of loss but we will be blessed with a resurgence of interest in his canon that is vast and flawed and impressive. We will get to remember him in repeat viewings as a magical creature, a gentle healer and a furious outsider. You can pick your own film titles to match to those roles. You’ll be surprised how many fit all three.

I’m happiest to remember him above all as just straight up fucking hilarious.

That’s my tiny piece of the portrait. Affix it somewhere onto the whole. I don’t know which part it fills in. Maybe a piece of chest hair.